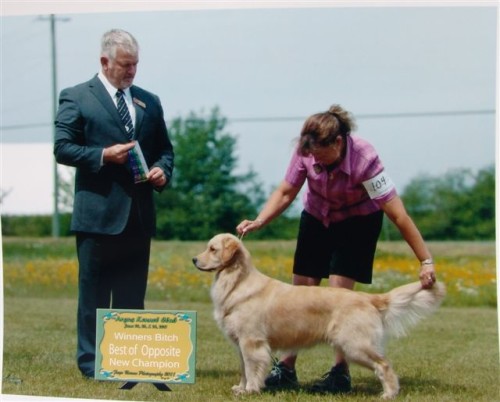 Jessie won Best of Breed and
Best of Opposite Sex

OFA Hips, Elbows, Heart & Eyes
Click Here to view up to date information on Jessie from the Orthopedic Foundation for Animals.

Jessie is a beautiful golden that won her championship in just 2 weekends of show in Canada! She is from a family of goldens with numerous Champion titles. Her mother is “Aries” (Canadian CH Clitheroe’s Ultra Y Aries), one of our goldens. Her father is “Striker” (Canadian CH Clitheroe Strikes The summit) from breeders in Canada.